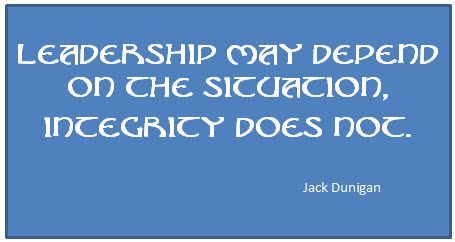 I am putting together my next publishing venture, gathering material from past entries and creating a new self-training program for emerging leaders. It is called “Building Leaders From The Inside Out – A Course In Developing Leaders With Character.”

In so doing, I’ve encountered some interesting feedback. One reviewer said that “The leader of a $30 million company can take this and make his company a $40 million one.” But another was less optimistic. They said that I was describing a saint, not a leader.

We obviously disagree. A leader is not determined merely by what you do. It is what and who you are.

There is no dichotomy between the leader at work and the leader at home. We will all pretty much agree that leaders can and do less than ethical, moral, even legal things. I certainly will not dispute that.

But I do dispute that such behavior is to be accepted, condoned, or rationalized that ends can justify means. No, it does matter how you do what you do and it is important to live with your life what you say with your mouth you ought to be.

Because we are what we are.

Part of the problem is that consequences are usually eventual not immediate. One can get away with lots of things before the walls fall in on you. Look at the leaders of Enron, or of other companies whose leaders were pulling shenanigans that no one saw.

But even if there were no consequences ever made evident, I aver that being a person of ethics and morality is not reserved for saints nor should it be cast off as the fortune of but a few.

Nor do I agree that leadership depends upon opportunity. One person has suggested that President Abraham Lincoln is well-known now because of his leadership in the American Civil War. However, to suggest that he was a great leader because of an event he did not cause (he might have because of his election but we won’t debate that here) is to misunderstand and misrepresent two critical things.

One is that leadership does not function until there is opportunity and that if you are deprived of opportunity you cannot become a great leader is false. Leadership opportunities are found daily and most often in obscurity. It does not require a Civil War to become a leader or a great one. Indeed, there are those within whom excellence in leadership does not reside that simply collapse under opportunity. No, leaders are leaders everywhere and every day. A leader, by virtue (note the word “virtue” because I’m coming back to it) of who they are and the gifts that are within them from birth, leads. The nuances of what they say, when they say it, and what they do indicate to others that a leader is present. Indeed, Lincoln had to be elected and that is of itself an indicator of appealing qualities.

The second is that greatness must be visible and celebrated to exist. This premise is fallacious as well. Celebrity and renown are often mistaken for leadership but they are not one and the same. Leaders may become well-known or they may labor in obscurity. But greatness is an essence. It is the substance behind the image (if there is any). Celebrity is an illusion.

Leaders are not made nor are they manifest by taking courses or reading books that expose them to information and ideas. Leaders are made because who they are, the virtues they possess, and the things they do, even if the effects are subtle, resonate within others. Others sense, feel, hear, see, and respond to what a leader says, does, and is.

Integrity is one of those words that are well-served when its etymology is explored. The root of integrity is “integer” which is “a whole number,” a number that can be written without a fractional component. There is not a separation of private from public, personal from professional. We are what we are. Nothing less and absolutely nothing more.

And because superlative, excellent leaders are not the sole domain of saints. There are far, far, far more superlative leaders than we might think.  You are probably among them…even if no one outside a few ever knows your name.