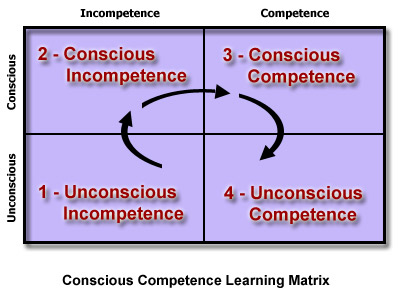 I want a staff entirely populated by trusted associates. Everyone does but hardly anyone has a staff who function at that level all the time. Someone somewhere at some time is unaware, that is to say, they are unconsciously incompetent.

You’ve probably seen this chart but I’ve put it in for a visual reference. Louis, the intern mentioned in the two previous posts, functioned more at that level that at any other, but was blissfully unaware of his incompetence. The operative word here is “blissfully”. Louis was incompetent, did not know he was incompetent, but had never been put up against visible, measureable, cognitive standards of awareness and performance to the point that he could grasp his incompetence.

He didn’t know that he didn’t know and, in that happy state of foggy standards, had appraised himself to be above average.

Notice I said cyclically. I did not say continually or regularly. To do so regularly or continually will provoke frustration, anger, fatigue, dismay, and deflation. People need positive reinforcement and a sense of accomplishment if they are to remain motivated.

But, they also need to be challenged if they are to avoid arrogance and self-righteousness. So, don’t nag, it works against you.

If you have people in your staff at the lowest level – forced laborer, (See the chart here) you should consider either finding a place for them to function somewhere else, or hand them off to a subordinate who can manage them thus freeing you to lead the others.

At the other three levels you can by and large leave people alone to do their jobs unless and until your direct intervention is called for. You, as leader, are monitoring and measuring two critical components – competence and confidence.

What are you looking for? You are looking for the teachable moment, that point when the person you are leading becomes aware that either they are ignorant of a required skill, attitude, aptitude, or insight and need to be instructed or they know of it but need coaching to integrate the skill, attitude, or aptitude.

So, your role is to:

The function of development is cyclical. It should get easier along the way because you build confidence within the person(s) you are leading and you strengthen their confidence between you and them so they more comfortably respond to your leadership. They develop confidence in your competence while they deepen confidence in their own competence too.