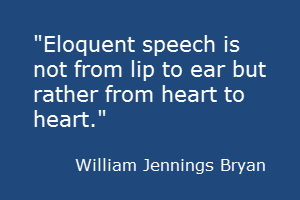 “It is with words as with sunbeams. The more they are condensed, the deeper they burn.” ~Robert Southey

Perhaps the greatest challenge faced by the wordsmith is brevity, to never use two words when one will do. Writing by pen and paper have somewhat facilitated brevity but word processors make it simple and easy to churn out thousands of pages.

But gifted communicators know that less is more and no more striking contrast may be found than that which occurred on November 19, 1863. Crowds had gathered to dedicate the Union cemetery at Gettysburg, Pennsylvania. The featured speaker was Edward Everett, celebrated diplomat, clergyman, and orator. President Lincoln had been invited almost as an afterthought. Everett, with a reputation for eloquence and public speaking, spoke for almost two hours.

No one remembers anything Everett said but Lincoln’s speech has become one of the most famous in history. The video clip below is by Ken Burns, producer of the PBS series The Civil War. Watch it and see if you don’t agree that “the more words are condensed, the deeper they burn.”

The impact of Lincoln’s short speech, only 269 words (just for reference, this word right here marks 263 words) is one of the most remembered and revered speeches in American history. Here it is.

Four score and seven years ago our fathers brought forth on this continent, a new nation, conceived in Liberty, and dedicated to the proposition that all men are created equal.

Now we are engaged in a great civil war, testing whether that nation, or any nation so conceived and so dedicated, can long endure. We are met on a great battle-field of that war. We have come to dedicate a portion of that field, as a final resting place for those who here gave their lives that that nation might live. It is altogether fitting and proper that we should do this.

But, in a larger sense, we can not dedicate — we can not consecrate — we can not hallow — this ground. The brave men, living and dead, who struggled here, have consecrated it, far above our poor power to add or detract. The world will little note, nor long remember what we say here, but it can never forget what they did here. It is for us the living, rather, to be dedicated here to the unfinished work which they who fought here have thus far so nobly advanced. It is rather for us to be here dedicated to the great task remaining before us — that from these honored dead we take increased devotion to that cause for which they gave the last full measure of devotion — that we here highly resolve that these dead shall not have died in vain — that this nation, under God, shall have a new birth of freedom — and that government of the people, by the people, for the people, shall not perish from the earth.

Many historians regard Abraham Lincoln as one of the greatest leaders in history. Few would have predicted it at the time. He lacked a formal education, came from very humble roots, was not strikingly handsome. But few would dispute that he was a superlative leader.

As such, we can extract several principles of eloquence from his speeches and writings. Here’s what I see in no particular order.

Lincoln did, Churchill did, Kennedy did, Reagan did, and I could list a dozen more known only to me. If you are not a gifted speaker, get help. There are coaches, programs, and tutors who can sharpen your skills. If you are a gifted and eloquent person, you are to be encouraged to note just how effective your words can be, indeed how effective they have been.