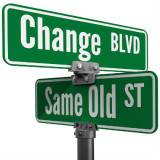 American television has begun its annual emphasis on nostalgia. They’ve begun producing and broadcasting programs that take a look back at the year about to end. While most zero in on news events and famous people, some look at the year’s best cars, the year’s best tech products, or those people who are no longer with us.

And things seem to slow down, at least here in the US. Next week, they will slow down even more. With Christmas coming in the middle of the week, little of significance will happen until January 5th. People will gather in close units. Families will congregate as will communities of faith. There will be last minute sales to entice gift-givers to part with more money, but by and large most people are ready for the holidays.

Even I will slow down a bit. Next week and the week after I will make only one post per week on Monday the 22nd and the 29th. You have different things to do than read my wonderings and I do too.

But while we’re in the mood it is a good time to celebrate the past year and anticipate the coming one. In my time management courses I often recommend that at the end of each day we write down three things you have accomplished.  Almost always there will be one or more items that are nowhere to be found on your plans, your daily schedule, or your task list. But they will be accomplishments nonetheless and therefore noteworthy.  The lesson is twofold – your get more done than you think and you get more done than you plan for.

So, if you write down three things every day that you did, at the end of the year you will have a record of 1095 things or more that you accomplished. See, you are a capable person and you are making progress.

But, there are lessons also in looking backward.

Let me close today’s post with a quote from one of the great innovators and inventors of theTwentieth Century, Walt Disney: “Around here, however, we don’t look backwards for very long. We keep moving forward, opening up new doors and doing new things, because we’re curious…and curiosity keeps leading us down new paths.”