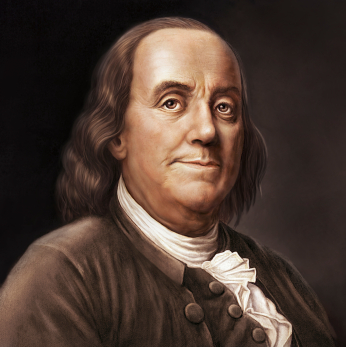 He was the tenth son of a Boston soap maker. His father intended for his son to enter the ministry but he had money enough for only one year of schooling when the profession required many. So he apprenticed the young man to his brother, James, a printer. The apprenticeship did not go all that well so after years of tedious work and regular beatings from James, at the tender age of 17, young Ben ran away to Philadelphia. Finding work there as an apprentice printer, he so distinguished himself that he began to make his mark in the city.

Using borrowed money he set himself up in business, winning contracts for government printing, and prosperity soon followed. After marrying, he and his wife expanded their business by opening a general goods store, a book store, and by expanding the print shop. In 1729, at the age of 26, he bought the Pennsylvania Gazette newspaper. In 1733, Poor Richard’s Almanac debuted. The colonies did not lack for almanacs but filled with aphorisms and lively writing, Poor Richard’s soon climbed to the top of the heap.

In the 1730’s and 1740’s Franklin’s influence extended throughout the city. He helped launch projects to pave, clean and light the streets, began a lending library, started a fire insurance company, and invented the Franklin stove. In 1749, he retired from business to focus on science and inventing. He is the man who gave us the lightning rod, swim fins, and bifocal eyeglasses.

By the 1750’s he would become more deeply engaged in politics, but did not embrace the idea of independence until 1765. Years earlier he had put together a proposal for united colonies as a way to relate to England but now began actively pushing for separation from the crown. Serving as a member of the Second Continental Congress, Franklin served as one of five on the committee to draft a declaration of independence.

His powers of persuasion, his skills of diplomacy, his gifts of creativity and inventiveness, his commitment to hard work and effectiveness places Benjamin Franklin among the pantheon of great Americans, great businessmen, and superlative leaders.

Biographers have revealed that Franklin was not an educated man, but he was, nonetheless, endowed with high intelligence. So, right off I want to disconnect advanced education from this quality. It is mostly true that people with advanced education are intelligent (I’m still not all that sure about some I’ve known). But it is NOT TRUE that if one does not have an advanced formal education one then can be deemed to be unintelligent. Education is one thing. Intelligence is another.

Intelligence as a word and as a quality is not simply defined. It is a very general mental capability that, among other things, involves the ability to reason, plan, solve problems, think abstractly, comprehend complex ideas, learn quickly and learn from experience. It is not merely book learning, a narrow academic skill, or test-taking smarts. Rather, it reflects a broader and deeper capability for comprehending our surroundings—”catching on,” “making sense” of things, or “figuring out” what to do. Savvy might be a synonym in our application here.

I have compiled a list of a dozen traits that indicate intelligence. I will address four of them today, the others on Monday. Here they are in no particular order:

There are 8 more traits but I’ve taken enough of your time. See you on  Monday.