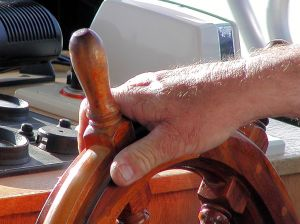 “Leading is easy, the hard part is getting people to follow.” Yogi Berra

Ok, so you can accurately read the circumstances and the people in them, have a clear concept of what has to be done, and can confidently articulate why it needs to be done. Can you get anyone to cooperate with your plan?

If you’ve watched classic American television, you have likely seen the exploits of Sheriff Andy Taylor and his intrepid deputy Barney Fife. Forgive me for using a fictitious illustration of a very real principle. Barney means well, takes his job seriously, and accepts responsibility willingly. But the badge he wears, the symbol of his authority, is not supported by a command presence.

It is the concept and practice of “command” that I want to focus on. Let me preface my explanation of this practice by defining what it is and what it is not.

ü To “Command” is to exercise authority but not the mere manifestation of authoritarianism.

ü “Command” is to offer direction (where we should be heading) and directions (instructions either general or specific about what to do in order to get there).

ü In “Command” is to manifest a command presence not just bravado, bluster, or arrogance.

The capacity, the skill to command, is directly proportional to a leader’s command presence.

Command presence is a military term which describes the respect others offer to you, the influence they allow you to have with them, and the willingness with which they will follow you. Command presence cannot be faked. You either have it or you don’t.

One in a position of leadership may carry the trappings of authority bestowed upon them by the organization or company for which they work. But there is another dynamic that plays out here:

The people you lead must allow you the authority you wield. If they don’t, you can carry on for a while by sheer authoritarianism, but they will get you back.

Command presence is the consequence of character proven over time, consistently fair treatment of subordinates, obvious knowledge proven in real life practice, and wisdom born in the fires of experience. Fall very far short in any of those and your ability to “command” will be compromised.

New followers who have not had the benefit of working with you will grant you a line of credit, so to speak. They will allow you a certain time to demonstrate your competence and command presence and will follow you during that time. If time proves the credit they’ve extended to you to be a worthy investment, they will continue to willingly follow and eventually escalate their compliance into pride.

Ask yourself these questions:

When you enter a room, does anyone notice?

When you speak does anyone listen?

Command presence manifests itself physically by body language. Leaders with command presence stand straight, don’t slouch, and dress appropriately. They use the trappings of power and authority within the context in which they function. They carry themselves with authority, not bluster. Demeanor and appearance means the person takes his responsibilities seriously and knows that dozens, perhaps many dozens of little things add up to create a package representing authority and function.

Command presence validates itself psychologically through a track record of sound decisions. Followers either see what you are doing and have done or they hear about it through others. Nothing encourages success like success.

Command presence manifests itself audibly. Leaders who possess it speak clearly, articulate their arguments, offer sound counsel, and lay out their ideas coherently.

The ability to “command” those who follow you will ultimately determine your success or failure because leadership is not a function that lives in isolation. It demands the presence of others and, most critically, their willing and enthusiastic cooperation.

What indicators of command presence have you seen in those you’ve followed? Have you tried to emulate them? How well does command presence work for you? How often and under what circumstances do you have to “pull rank?” And could that have been avoided?