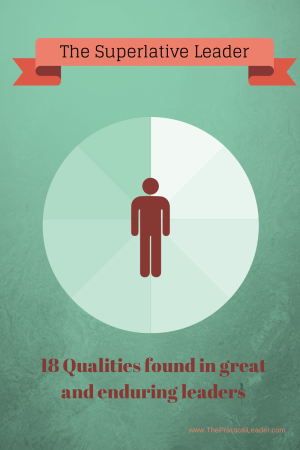 They are well-known and they are hardly known. They work in the spotlight and they labor in obscurity. They achieve high levels of financial success and they barely scrape enough to get by. They garner large followings and connect with two or three.

Leaders are everywhere in every place and at every level. You and I have encountered them forever. We followed them before we could even comprehend what a leader was. There was just something about them that compelled us to consider what they say, respond to what they ask, and follow where they led. But some are simply better at it than others.

In an antique store about four miles from where I used to live, Elvis Presley greets you as soon as you step inside. No, he hasn’t quit his job at the car wash in Grand Rapids and works there now. This Elvis is not the real thing, not even one of the many impersonators making their living imitating the legend. This Elvis is cardboard, a six-foot-tall printed image. But it looks just like him adorned in black leather with a silk scarf around his neck, and sporting the unmistakable Elvis smirk, he stirs the heart of every Elvis fan he greets. Looking from the front of the store you might think it was the real thing, especially if you wanted to believe its him. At least that’s what I’m told. The owner says he sells a couple of cardboard Elvis’s a month at $30 bucks apiece. Die-hard Elvis fans are quite eager to lay down the cash for the mere image of greatness.

Steven Covey’s book, “The Seven Habits of Highly Effective People,” identifies two types of greatness – primary and secondary. Primary greatness, he writes, is essential greatness; the greatness that emerges from a person’s character, from the inside out. He or she is the essence of greatness in every dimension and in every place. But secondary greatness is the fame and renown that results from the person’s personality and gifts, from the outside out.

He or she is not really great in the essential sense. There may be serious flaws inside, thus they only appear to be great. A cardboard Elvis so to speak. And from the front of the store (or sitting in the audience) it’s hard to tell the difference.

Leaders study leadership. We look at techniques, read biographies, and marvel at the accomplishments of others. But perhaps we should take one step back.

Instead of studying leadership alone maybe we should look at the person who manifests leadership. Rather than focus on leadership itself, let’s examine the leader himself or herself. (Note: trying to maintain the use of gender indefinite terms, I use “he” and “she” or “him” and “her” interchangeably. Effective, superlative leaders are, of course, found in either gender.)

There are any number of us who are quite eager to buy into an image of greatness, even if it’s no more substantial than the cardboard Elvis. And that gets me “all shook up.” We want to believe that our celebrities are as great as their image and so the mere image of greatness too often substitutes for essential, actual greatness.

Leaders incarnate leadership. Leadership emerges from a leader, emanates from a set of characteristics that are found naturally in some, acquired through the experience of life in all who exhibit it.

Leadership is the result of qualities made manifest, not the other way around.

The on-stage performance too often misrepresents what really is a paucity of greatness backstage. Unfortunately the system is skewed in favor of the performer. Followers (and fans) are too assuming and leaders are too quick to play on those assumptions. We’re too accommodating of their inadequacies, in fact, too often we don’t even want to know who or what they really are. We resist discovering whether their greatness is primary or secondary.

If character is, as one author has put it, a collection of values, then we obviously have not gathered the critically important values. Our character is the sum of all we are and do, not just what we appear to be. Judging according to appearances is a fatal indulgence. When we rely on image we borrow strength and build weakness in these ways:

First, by allowing our leaders – we might even say we’ve encouraged them – to borrow strength from position and image, we build weakness within them. In order to maintain and further their position of influence and authority they must exploit the position and image more and more. It becomes increasingly imperative to prohibit anyone from really knowing them closely lest the public discover what’s what and who’s who. They turn up the heat on the public performance to bolster support for the image.

Secondly, because we borrow strength from their weakness by investing in their image, hype, and celebrityism, we build weakness within ourselves. We lose touch with who we really are and rely on outward imaginary strengths; volume, noise, and the systems and practices of our position.

Third, because our hearts, motives, and opinions are heavily invested in image, not character, we lose contact with truth. We believe something to be true which may or may not be true. If it is discovered that what we believed to be true is not really true, if it is discovered that the confidence and expectations which we held prove us to be fools, we shoot the messenger who revealed the truth to us. When we fall into this trap the result is delusion, a form of insanity.

Fourthly, we build weakness into our relationship with our followers because we’ve staked a claim in acres of air. A superficial groupieism results where we play to the image and illusion of what people think we are and want us to be not what we really are. Those we lead are following someone who does not really exist. Our leadership dynamic, that set of actions, words, and attitudes that have provoked and inspired others to come along on our journey, is not real. Thus we continually must play the role and perpetuate secondary greatness. Essential greatness ceases to exist if it ever existed at all. This happens so often in so many contexts it has become common while primary greatness, that greatness of leadership that is birthed in qualities of character has become all too rare.

Fifthly, when we focus too much on a leader’s talents and gifts and too little on his character we allow, perhaps even promote cardboard heroes who look just like the real thing. Unsung heroes labor ignored in their unglamorous places of service. We then build weakness within our ranks because the truly great are ignored while hype is rewarded. Many are the great who labor in obscure places, whose public speaking skills are mediocre at best, whose boardroom and platform style are anything but flamboyant, but whose intimacy with who they are and what they feel called to do is real and deep.

We build weakness within our ranks because we reward the celebrity but punish the hero. Superlative leaders are enduring ones. They function over a long period of time. They maintain their effectiveness through good and bad times. The glitter and glam wears off, the substance is revealed. If little substance is there, then what we thought was leadership turns out to be crashing disappointment.

Superlative leaders are capable and do draw attention, but there’s more to them that a captivating style of speaking or flair before a crowd. Much, much more.

I am however, confident of this. You possess far more of them than you might think. Please do not be intimidated by the comparisons that are inevitable. I write these things not to diminish your self-opinion but to build it. You have accomplished more than you think, learned more than you might remember, and have extended your influence in places and upon people upon whom you have no knowledge.

For the next 2 ½  months or so I will be revealing, and discussing one by one, the 18 personal qualities of a superlative leader. See you on Thursday.