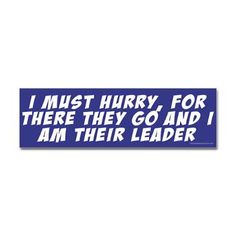 This concept of leading from behind appears in the news fairly often. The term and the concept have found their most academic expression in an idea put forth by Linda Hill of the Harvard Business School. She claims it originated from reading Nelson Mandela’s autobiography when he likened leaders who shepherd their flocks from behind. Hill’s concept is that of collaborative effort within teams who take responsibility for projects and goals.

Having spent many years working with Navajo leaders in the Southwestern United States I learned a little about shepherding. I’ve spent even more time working with leaders in a great many cultures and found that the dynamics and principles of effective leadership are universal.

I need to point out that Hill’s premise of “leading from behind” is more of an observation about certain specific and limited iterations of work group dynamics than it is a proven practice. She opines that the workplace of the future will be different, but no one can really say what or how.

The phrase “leading from behind” is not one used by Mandela but it has been kicked around in the media with both positive and negative intentions. Since this blog is focused on practical leadership, it is a worthwhile investment of our time to take a closer look.

All leadership gifts and their incarnation are active not passive. Banish from your thinking now that leading from behind can mean that you are missing in action. If anything other than chaos and tumult is to result someone somewhere has to lead. A clear and certain trumpet call musters the troops. A sure and steady voice gathers the attention of the workforce.

It is deliberate not accidental. Even collaborative and inferred effort is done so calculatingly. The shepherd can let the sheep wander on their own only within parameters. There are dangers and there are opportunities. Effective leaders are not always hands on and predominant, but they are always there.

It is purposeful not incidental. I both laugh and cringe when I hear a leader claim to be involved when something happens that they had little or nothing to do with. Leading from behind means the leader has intent and ideas and has made both known even if they did so subtly.

It is collaborative and cooperative. One technique I use in workshops is to give an assignment, then break up the group into smaller clusters of three or four people. With assignment in hand, the clusters are told they have but a few minutes to complete the task. If there is a natural and confident leader, the group will come together, divide the job into smaller tasks, and then create the assigned work. If not, nothing productive happens. Discussion ensues, arguments arise, confusion reigns. Leading from behind may mean exercising influence indirectly but it does mean exercising influence.

It works best in times and places of non-crisis. If a child is running into the street and into traffic, it is not the time to convene a focus group to discuss the threats of playing in the street. It is the time for action. Leading from behind, as Hill describes it, works best in non-threatening, non-urgent conditions.

It is, at this point in time and evolution, more theoretical than it is practical. While some groups have enjoyed some success using indirect leadership methods in smaller work groups, there is someone of strength at the helm of the ship. It is unclear to me whether Hill advocates this method for the leadership of entire companies or whether she intends it for use in smaller units inside companies.

What it is not:

It is not rewriting the facts to make it look like something happened when it has not. This is a CYA (cover your a** for those readers outside the US) maneuver used by someone who should have been paying attention. Politicians do this all the time.

It is not ignoring a situation or neglecting one then claiming you are leading from behind. This is a face saving effort on the part of someone who is either reluctant to lead or out of ideas.

It is not passive. Even those who lead from behind lead. They do not do nothing and try to call it leadership. They are exercising influence deliberately and purposefully. An intent is fixed, a purpose is validated, and actions are thought through. One does not sit idly by and hope something good happens because effective leaders know that hope is not a valid strategy.

It is not an excuse for doing little or nothing while at the same time claiming to be leading. Neither laziness nor inattention are qualities found in an effective leader. Shepherds do not sleep while flocks wander about. They do not sit under a tree while the sheep stray off over the hill. Shepherds are constantly scanning for danger, remembering the need of the sheep for food and shelter, and direct the flock accordingly.

It cannot take the place of strategic thinking and strategic planning. In their book “Transforming Health Care Leadership” authors Michael Maccoby, Clifford L. Norman, C. Jane Norman, and Richard Margolies devote 140 pages to explaining and illustrating strategic intelligence and what it means for leaders. I won’t even attempt to cover their research here but they’ve identified four key components worth noting here – foresight, visioning, partnering, and motivating. Hill seems to focus on partnering and motivating. I suggest that if there is no one to exercise foresight and define vision, then just about anything can…and will happen. And I don’t mean that in a positive sense. I mean that in its implications of catastrophe.

In short, one can lead from behind only if one knows what lies ahead and what it will take to get there.

4 thoughts on “Leading from behind, what it is…and what it is not”