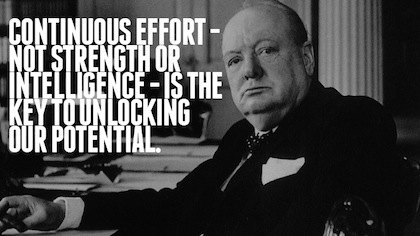 The son of a British nobleman and an American heiress, Winston Churchill’s role in World War Two has become synonymous with excellence in leadership.

Churchill saw action in Cuba, Egypt, Sudan, and the battles of WWI. His career as a statesman began at the age of 25 when he was elected to the House of Commons. He went on to serve as First Lord of the Admiralty, the Minister of Munitions, the Chancellor of the Exchequer, and even a period of political exile before becoming Prime Minister. Not without his failures (who is?) he took over as Prime Minister at perhaps the most crucial time in Britain’s history and went on to lead the country through the war.

Considered by many historians to be the greatest statesman of the 20th century, we must understand why. He possessed a powerful ability to inspire people even in the direst of situations.  Publicly he voiced and demonstrated optimism, enthusiasm, and confidence even if privately

he felt differently. Just after he became Prime Minister, one of his private secretaries spoke of his drive saying:

“The effects of Churchill’s zeal was [sic] felt immediately in Whitehall.  Government departments which under Neville Chamberlain had continued to work at much the same speed as in peacetime awoke to the realities of war.  A sense of urgency was created in the course of very few days and respectable civil servants were actually to be seen running along the corridors.  No delays were condoned; telephone switchboards quadrupled their efficiency; the Chiefs of Staff and the Joint Planning Staff were in almost constant session; regular office hours ceased to exist and weekends disappeared with them.” (Geoffrey Best in his book – Churchill and War)

Superlative leaders do not become great accidentally nor do they stumble into greatness. They grow into it, coming to the right place at the right time possessing the right gifts seasoned by the hard challenges that waylay lesser men and women.

Through the ups and downs they possess drive and purpose which does not lose its vibrancy once they attain positions of great potential. They are fired from within by passion that is issue driven not interest driven. Issue driven leaders are motivated by a cause, inspired by a possibility, maintained by a faith in effort that they believe will surely pay off. They know without wavering that there are things worth making sacrifices for and that the hand of the diligent will indeed rule.

Interest driven passion fades as soon as the fun wanes and the work waxes. Like dogs chasing butterflies in a field, they flit from this passion to another, never staying the course long, never accomplishing more than burning fuel and time.

Passion and vision, therefore are joined at the hip. The former without the latter consumes time and burns brightly but leaves little lasting result. Vision with passion just sits there, mocking our words and taunting our well-written plans.

Indeed, there are 4 ways to destroy your life as a leader:

When I say a superlative leader possesses drive it is implied that s/he is driving somewhere not just here or there. Drive and purpose are two sides of the same argument. Each implies the other.

In 1938, Philadelphia Attorney Robert Abraham saw the approaching war, and paying close attention to the advance of the Imperial Japanese Army in China, he wrote a poem describing a Philadelphia couple as they drove through the countryside to a friend home to play cards. Remembering some of the battles that had been fought there in the nation’s history, Abraham drew comparisons between what had happened and what was happening in too many parts of the world. His poem was published by the Saturday Evening Post and ended like this:

And we are dying too.

Than death inside of you?

For some men die by shrapnel,

And some go down in flames,

But most men perish inch by inch,

In play at little games.”

I have briefly described the effects of the lack of drive and purpose, what about the benefits? Well, I’m out of space for today. In Monday’s post I will list them out. See you then.

FYI – you can read the full text of Abraham’s poem here.